The Portuguese in Africa in the 19th Century

The Portuguese in Africa in the 19th Century 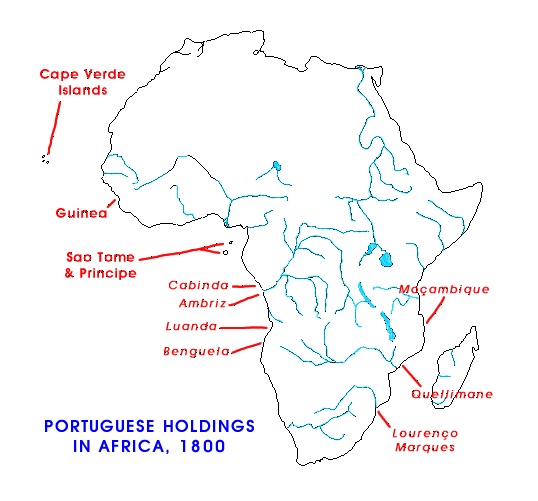 As the European conquest of Africa unfolded, Portugal played the role of catalyst rather than leader. Hampered by its small size and weakened by several centuries of European warfare, Portugal was the smallest and poorest of Europe's imperial powers by the end of the 19th century. As a result, it was unable to hold on to everything that it claimed, but by playing off the major powers (England, France and Germany) against each other, Portugal managed to expand the territory that it actually controlled by the end of the Scramble for Africa. ﻿

Portuguese overseas expansion began in the fifteenth century, thanks to several
factors that gave the small coastal nation an advantage over its larger European neighbors. First, in the 1300s, Portuguese shipbuilders invented several new techniques that made sailing in the stormy Atlantic Ocean more practical. They combined elements of different types of ships to construct stronger, roomier and more maneuverable caravels. They also took advantage of more reliable compasses for navigation, and benefited from the school for navigation created by Prince Henry "the Navigator" (1394-1460) at Sagres in 1419. Starting with voyages to Madeira and the Azores (islands in the Atlantic) in the first part of
the 14th century, the Portuguese systematically extended their explorations as far as Japan by the 16th century. In the process, they established forts and settlements along the West and East African coasts. In the 16th through 18th centuries, the Portuguese lost their lead to other European nations, notably England and France, but played a major role in the slave trade to satisfy the demand for labor in Brazil.

By the beginning of the 19th century, Portugal controlled outposts at six locations in Africa. One was the Cape Verde Islands, located about 700 miles due west of Dakar, Senegal. Discovered by Alvise da Cadamosta of Venice in 1456 and claimed for Portugal by Diogo Gomes about 1458, this archipelago of eight major islands was devoted to sugar cultivation using slaves taken from the African mainland. The Portuguese once had extensive claims on the West African coast -- since they were the first Europeans to explore it systematically -- but by 1800 they were left with only a few ports at the mouth of the Rio Geba in what is now known as the Guinea-Bisseau. To the east, the Portuguese controlled the islands of Sao Tomé & Principe, located south of the mouth of the Niger River. Like the Cape Verde Islands, they were converted to sugar production in the early 16th century using slaves acquired on the mainland in the vicinity of the Congo River. By the end of the 19th century, Portuguese landowners had successfully introduced cocoa production using forced African labor.


Further south, the Portuguese claimed both sides of the mouth of the Congo
River, as well as the Atlantic coast as far south as the Rio Cunene. In practical terms, they only controlled a few port cities including Cabinda (north of the Congo River mouth), Ambriz (south of the Congo's mouth), Luanda and Benguela (on the Angolan coast) plus some river townsin the Angolan interior.

The last area claimed by Portugal in Africa was along the southeast coast on either side of the mouth of the Zambezi River. After reaching this area, known as the Swahili Coast,at the end of the 15th century, the Portuguese came to dominate most of it by the end of the 16th century. During the 17th century, they lost control of everything north of Cape Delgado to Arabs from Oman (who established the Sultanate of Zanzibar), leaving them with major ports at Mocambique, Quellimane, and Lourenco Marques, plus settlements along the Zambezi and a few other rivers.


The Portuguese were the first Europeans to claim territory in sub-Saharan Africa, and their example inspired imitation from other European powers. For the British, the Portuguese were acceptable proxies in the competition with France, Russia and Germany for world domination. For Portuguese governments, the British alliance gave them influence that they could not command themselves, while the idea of a Portuguese empire offered something with which to distract domestic opponents from the struggles initiated by the Napoleonic Wars.


The issues that were raised by Portugal's claims in Africa and the efforts of other countries to whittle them down became the fundamental issues of the Congress of Berlin (13 June - 13 July 1878). In the end, the Congress settled more than the future of Portugal's African holdings -- it also set the rules for any European government which wished to establish an empire in Africa.

Little known data about the Continent.!