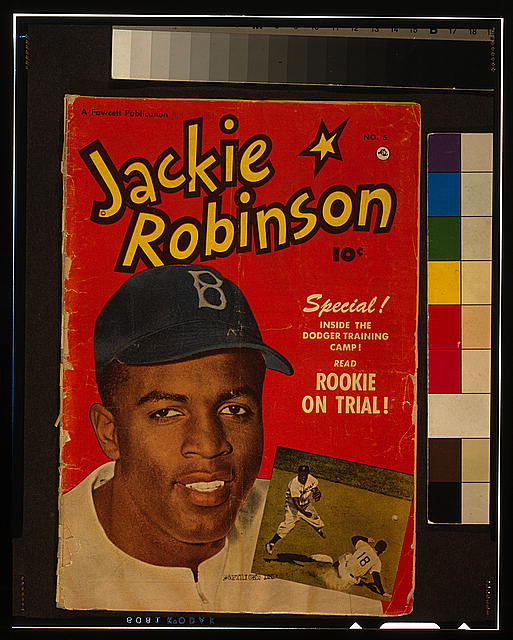 I always believed his name was "Jackie." It wasn't until today that I learned that "Jackie" was a nickname.

After looking into information about the Negro League Baseball Museum, I also learned that the museum itself has received nicknames; including the "Negro Leagues Hall of Fame" or the "Black Baseball Hall of Fame", however whoever is responsible for editing the museum's website not only rejects to being identified as such; but even indicates that the "proper" place to recognize baseball's greatest players is the National Baseball Hall of Fame in Cooperstown. Much more to look into but that is a confusing position to take especially in the wake of hearing so called black people complain about not receiving enough recognition from the actors academy.

The mental plantation appears it will be the last to fall.

Click on the above link and see where it leads......

Robinson and his son David (then age 11) are interviewed during the March on Washington, August 28, 1963.

In 1947, Jack Roosevelt “Jackie” Robinson would make American history as the first African-American to officially play Major League Baseball in the 20th Century. On July 18 1949, his status as a hero would see Jackie Robinson summoned to testify before the House Un-American Activities Committee (HUAC).

HUAC was holding hearings on the topic of “Communist infiltration of minority groups”. In April 1949, the radical African-American singer and actor Paul Robeson had allegedly stated that African-Americans would be reluctant to fight on behalf of the USA against the USSR. Robinson was invited by the committee as a “friendly” witness to rebut Robeson’s claims.

Robinson began his testimony by stating that “it isn’t exactly pleasant to get involved in a political dispute”, but that he decided ultimately to testify out of “a sense of responsibility.” While noting that “I don’t pretend to be any expert on communism or any other kind of a political ‘ism.'” Robinson pointed out that he was “an expert at being a colored American, with 30 years of experience at it.” After reminding the committee that he was still one of only seven African-Americans in Major League Baseball (out of 400 players), Robinson made a powerful statement about both African-Americans’ desire for civil rights and the tendency fostered by HUAC to see all social protest as a result of conspiratorial subversion:

“The white public should start toward real understanding by appreciating that every single Negro who is worth his salt is going to resent any kind of slurs and discrimination because of his race, and he is going to use every bit of intelligence such as he has to stop it. This has got absolutely nothing to do with what Communists may or may not be trying to do. And white people must realize that the more a Negro hates communism because it opposes democracy, the more he is going to hate any other influence that kills off democracy in this country-and that goes for racial discrimination in the Army, and segregation on trains and buses, and job discrimination because of religious beliefs or color or place of birth.

And one other thing the American public ought to understand, if we are to make progress in this matter: The fact that it is a Communist who denounces injustice in the courts, police brutality, and lynching when it happens doesn’t change the truth of his charges. Just because Communists kick up a big fuss over racial discrimination when it suits their purposes, a lot of people try to pretend that the whole issue is a creation of Communist imagination.

But they are not fooling anyone with this kind of pretense, and talk about “Communists stirring up Negroes to protest” only makes present misunderstanding worse than ever. Negroes were stirred up long before there was a Communist Party, and they’ll stay stirred up long after the party has disappeared-unless Jim Crow has disappeared by then as well.”