How far have I gone?

How Far I Have Gone:

Having read the forum discussion, (How far have we come?) and then, after reading the initial response, a strange feeling appeared in the sensory part of my being. Upon serious analysis it dawned on me that, (maybe, just this one time) the process that is materializing, at this point, needs to be discussed. In the first place is the video about the product that is said to have been sold at a target discount store in upper Manhattan, Harlem, N.Y. City. The immediate reply to the video was, “so what!” “what does this have to do with me”?

At this point, there is a finger pointing towards the program that, for most, is practically impossible to see. The program allows, and is the cause, for certain buttons to be pushed and strings to be pulled and manipulated by the puppet masters or by those who are in control of the general population. An example of a controlled reaction, behavior pattern, using a confederate flag was presented in an attempt to illustrate how most people have an automatic response to what is known as an on/off switch. The question was then asked about why the same people who react to the symbol of southern rebellion do not think about the union flag (red, white and blue) in the same way.

The next angle to appear or manifest out of this mental intercourse almost seemed to be the beginnings of an argument. If this be the case, then we now have the opportunity to clearly see the way in which organizations, families, communities and countries, empires, kingdoms, etc. have fallen, have been toppled, torn apart and destroyed by utter nonsense.

An important aspect of the red pill training is to help the learner move toward developing for self the innate capacity for mental sensory perception. In the film, Matrix, the character Neo almost killed himself upon being brought into a new mental environment. Neo had to be convinced that he would have to slow down and take his time in order to understand this introduction into an alternative world view or he would eliminate himself from the equation of life.

Onto the next article that requires delicate inspection. A response to the reply then begs the question: “Did I put the Topic in the wrong place? Statement: This has to do with what is called the race category or section. There is an applicable axiom that is appropriate here and it says “Above all things get under-standing”. This is a very sound piece of advice if one is to ever learn or gain the kind of insight that is needed in order to know how to see beneath the surface. Let us examine this discourse carefully at this juncture.

Argument that develops from interaction between two or more people that has no premise is non-sense. If there is no premise there is no foundation for argument. The word argument is based on logic not battle. Nothing can be gained from the engagement of war that has no sound reason. In the Greek tragedy Troy, Helen, was a senseless reason for a kingdom to enter into a condition of war. And now, the original topic of discussion is reintroduced back into the light. And then there is no more discussion. If Dorothy is ever going to find the answers to her questions, she will need to learn how to travel on the yellow brick road and this is not the way. Maybe she should follow toto. In the second place; the discussion is taking place between two people that are at different levels of understanding. The degree of awareness is a very important condition to consider. In the search for Neo, one candidate for the one has taken the red pill six (6) months ago and the other candidate took the pill six (6) years before. Sometimes those who have already received answers from OZ are impatient with those who have not yet traveled the road. Sometimes those who have experienced an expanding range of consciousness might forget that they too have had to travel this road.

Most times, those at the gate are not aware of the treasure that waits further down the line and deeper into the journey. Remember, Toto (Anubis) is sniffing out the pathway that is being traversed. Let us look one more time at the question “How far have we come”? Follow that with, where have we come from? If I allow myself to be distracted by nonsense, then, for sure, we have not actually traveled very far at all. So far as anyone might KNOW, the label on the can in the target store is just another silly willie lynch letter. In other words, this probably is a hoax. A setup that is produced to cause hits on the internet. If not, and it is real, then it is bad business because as a consequence target is going to lose a whole lot of customers. Those who can think relative to reality do not CARE one way or another. The question becomes, how far have we come from where? The pertinent statement here is: How far have I gone away from all of this nonsense!!

It is truly a marvelous thing when one can measure his/her steps. That is becoming aware of

I recently saw a post on Facebook that read, "I took my dog to the welfare office and I explained that my dog is lazy, does not want to work and does not know his father.  He will start collecting his checks tomorrow."  I almost went for it, and almost responded to it.  I can say I have come far in the past I would of bitten into that poisonous apple.  After reading this thread I am very glad I did not respond.  What would I be trying to prove or why would I have felt it necessary to prove anything to the coward who posted it?  As I read this I knew I was on the correct path as i read, "If there is no premise there is no foundation for argument."

'Every ONE should LOOK!!!

Comment by Aaron (Al) Lewis on September 23, 2009 at 5:05am
While all of this may be humorous, especially if one knows better the fact that inferiority is being pumped into the brains of SCBP constantly and continuously is roof enough for me at least to develop some sort of filter to purge and repel it when it comes at me. It is vital we teach this to our children so the program never gets in.

Comment by Aaron (Al) Lewis on September 23, 2009 at 5:01am
Barry, you know I though about that and Uncle Ben's rice also and let's not leave out Betty Crocker. While we are at it as my son loves to point out why is it that when McDonald's does a commercial showing so called black people there is always a R&B bass line accompanying it? I guess Negroes love to dance while eating those Mickey Ds? 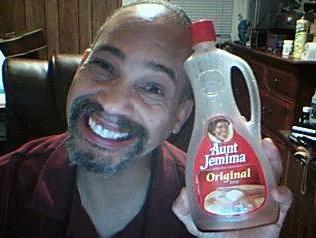 In stores across america

Comment by Aaron (Al) Lewis on September 20, 2009 at 3:54pm
Brother Robert, no desire or inclination to crucify you. That is not the intent of the Red Pill. Our dedication is to the science and art of knowing, period. Some of the first questions we ask anyone we come into contact with in our "learning environment" is how did you come to know what it is that you know? In other words what were the processes you used to come to your conclusions?

So I am going to ask you a few questions. Please don't take offense at me for asking it's just that I try to never assume anything about anyone. You may be way more proficient at this than I. So to establish some baseline on where we are in our process of coming to know and understand I would like for you to address, if you would, to what extent are familiar with etymology?

Next I'd like to ask you if you are familiar with and to what extent do you employ the epistemological process when doing study and research? There are more, but the mastery of these two are foundational to knowing and understanding. That way we get to what's beneath the surface of things.

As I was so aptly reminded in the book, Discipline, Violence and the African American Child, by Clifford Black and I am paraphrasing, "When one meets a horse one wants to train what is the first thing one must ascertain from the horse? ......... If the horse knows more than you," That works both ways.

Comment by LottaLox on September 18, 2009 at 7:05pm
Ok...so I saw the video and I was in tears from laughing so hard! It didn't offend me in anyway! Now "if" Target does sell these sodas for real... then I think it is bad business for them and that is putting it lightly. But I was tickled. Partly because where I am employed, dwells hundreds of so called black kids who actually look like those kids on that can. And we have outtings for the residents, they look like that picture on that can eating watermelon. The other reason is because it was just plain ass funny to me. I guess I am a litte further than some but not as much as others and... this is a timely process for me.

Comment by Aaron (Al) Lewis on September 18, 2009 at 6:23pm
Barry, now that's investigation my man. I think this is what needs to have happen, check and re-check and check again to determine if what is before me is real and true.I wrote Target to see if they have any explanation. I just want to know. I not going to spend any time protesting.