A Case Of Race III 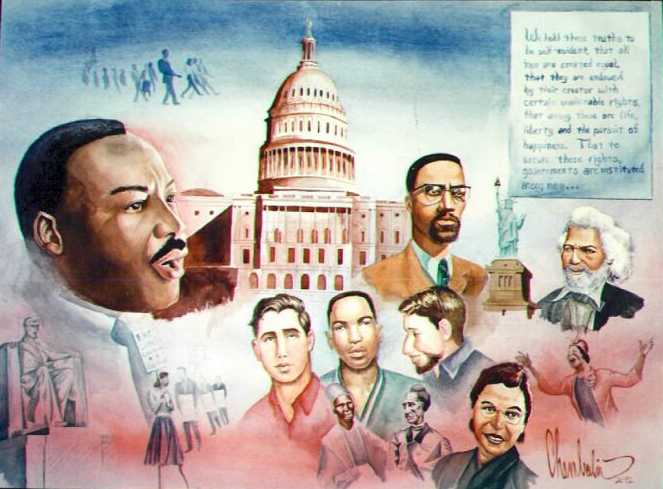 On Saturday Oct. 16, 2010 the Cooper/Jones Initiative sponsored the third installment of "A Case of Race III" at the Memphis City Schools Teaching and Learning Academy. This symposium was a continuation on 'a real conversation' on the issue of "race", focusing this time on the affect/effect of integration on the community, especially the so-called Black community.

The facilitators, Mr. Clifford Black, scholar, historian and connoisseur of information and Mr. Aaron "Al" Lewis, co-founder of Inward Journey and chief architect of the Underground Railroad Training Odyssey, served up an all encompassing and very impressionable presentation. We were led through an examination of the time line from 1865 to 1965, during which time the so-called Negro was engaged in 'the struggle for freedom and equality.

Was the struggle for freedom and equality hijacked by the Civil Rights Movement?

In the face of economic and social situations today, what were the results of integration that occurred in the aftermath of the Civil Rights Movement. We were informed on what integration was, how and why it was proposed, by whom was it proposed and what was the desired results of its implementation. With the final question being asked, "did integration work for America?"

The presentation included an exercise that showed the effect/affect of integration on the so-call Black family unit and the community which was, for all intent and purpose, working in the face of segregation and 'Jim Crow" laws that were in effect prior to the passage of the civil right amendments to the United States Constitution. We observed with great attention how the progression of the labels, from slave, coloured, negro, to Afro-American, African-American, Black, that were affixed to our community by different "leaders" and how these labels affected our perceptions of "self". The so-called Negro business men and families of the 30s, 40s, and 50s worked tirelessly to create an economic situation where there was no need for 'social welfare' and families stayed intact through hardships brought on by those segregation laws in effect at the time.

Prior to the inception of integration and the economic changes that followed, there were numerous Black owned businesses including banks, hotels, insurance companies, law firms, colleges, schools & institutions, hospitals farms, towns, communities, night clubs, as well as great churches and social organizations. Integration actually wiped out many if not all of these entities and introduced a new age of poverty, blight on the communities and the possible annihilation of the so-call Black family in its wake.

Those in attendance were gifted with information concerning guilt, shame, fear, inferiority, worthlessness, self-hate and other unhealthy emotional aspects of a community which had been displaced, dispossessed and disorganized since 1965. As a possible result of the changes that were fostered in the name of civil rights, it appears that integration was more of an accommodation for 'capitalism' than justice and equality for all. What was also destroyed was the opportunity for the American Negro to grow and compete against the capitalist giants in America. A chance to bring into full existence a dark-skinned America that asked no quarter in caring for its own and taking its rightful place as co-owners of "The American Dream".

Today as we examine the myriad of problems facing America, especially the education of our children, we must search for causes at the same time as we ponder and propose answers. It is not beyond us to create a better system to address the flaws and fallicies that are constantly being introduced as remedies by fickless "leaders" who are seemingly unaware of the condition of the system. We will continue down the path of self-education, addressing the concerns of the community with great educational opportunities and symposiums by design to enlighten and enhance the existence of the individual against the backdrop of the community.

We would like to thank Representatives Barbara Cooper and Ulysses Jones for their continued support and efforts in reforming the educational priorities of the district of individuals and businesses that they represent.

Comment by Clifford Black on October 19, 2010 at 10:30am
This is an example of being willing to do some work in order to gain greater degrees of "INSIGHT" ----- Keep "flying" Brother E.