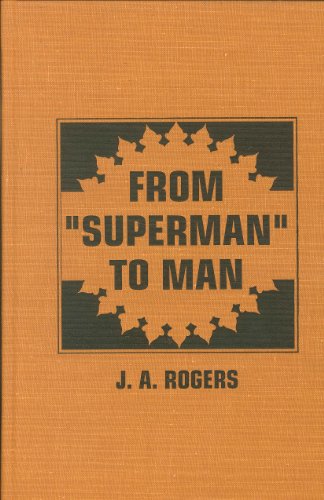 Considering the manner in which this society/culture/civilization has evolved or progressed along such 'racial' lines, it is a wonder that more people do not recognize the works of Joel Augustus Rogers as a means of deciphering the imbedded codes that persist in their philosophical development. Quite simply, there are some notions whose times should have past but are seemingly being kept alive through artificial intelligence as derived through continued mis-education of the masses. Specifically, the notion of superiority and/or inferiority among the specie human wholly based on "race" is pretty much drivel at this point, as it is evidenced that the human mind is capable of excellence withstanding any and all alleged foolishness of race. Granted, there are those among us who would excel in fields of science and mathematics but it can not be assumed that this excellence is reserved for only certain breeds of humans. That is the most ridiculous of notions but it appears that this notion is continuously all but shoved down the throats of the...gullable!

It would take merely a peripheral reading of the work produced by J.A. Rogers to begin to understand that "race" plays no significant role in the abilities or salient production of thought among humans. Instead, we see an attempt to create a system of oppressive behavior that fosters the notion of racial superiority and inferiority. Consider this introduction of Rogers;

To fully understand the history, life, and times of Joel Augustus Rogers and his contributions to anti-racist historiography is to grasp how African Americans, as a "racial class and caste", are prisoners of their social existence. This social existence is set within a class relationship that has a dialectic of oppression, driven by domination and resistance to that domination. And it is revolutionary resistance that liberates the dominated class. The social relationship of oppression has its material basis, and that basis has its ideological manifestation. Joel A. Rogers' (1883-1966) life spanned the period in which the material basis of white oppression was solidified between the shadow of slavery and the plantation, and the civil rights movement of the 1960s. In this period, white capital kept black labor under its heel while refining the powerful ideology of white superiority and black inferiority in mass media, science, literature, theatre, film, and academic scholarship.

In their attempt to reject this ideology, Rogers and other historians wrote in direct response to what I term the "white supremacist school" of American history that was dominating the academy at the turn of the 20th Century. Commenting on this particular school in his 1968 presidential address at the Organization of American Historians, Thomas Bailey stated, "False historical beliefs are so essential to our culture.... How different our national history would be if countless millions of our citizens had not been brought up to believe in the manifestly destined superiority ... of the white race."

Joel Augustus Rogers was, as were his contemporaries, a man of his times. Like all humans, Rogers was a product of his social existence. This reality led him to a social consciousness peculiar to the historically specific social relationships in which he, as a result of his social class and "racial category," had lived and struggled. White versus Black was the social relationship that produced a disparity in social existence and, therefore, social and political thinking within each racial category. Historiography, as a mold of social thinking, developed its own dialectics of historical interpretation within the social relationship of American capitalist political economy. Slavery, peonage, sharecropping and Jim Crow Slavery, produced a historical mindset within an antagonistic polarity between White and Black America.


Now you tell me that the idea or notion of racial superiority/inferiority has not played a major role in the evolution and progression of this society/culture/civilization that we live in and that as a result there are individuals who feel that they need to prove their worth or work harder at it in order to attain excellence.

At times it would appear that many of "us" are so locked into this type thinking that it makes it difficult of the scholar/academic/intelligentia among us to get our attention on vital issues such as the education of our children. What will it take to break the spell of the magician/mesmerizer who continues to weave the construct of the matrix around us and all but force us to pay homage to a "dead practice"?

When looking to address/treat/adjust the 'shadow baggage', one must connect with those who can provide a lighted path into self-awareness and help one rid self of the burden of 'corrupt' thought processes. One must look beyond the known and turn inward for the journey to self. One might want to invest some moments in readings from historians such as Joel Augustus Rogers!

@Ernest>When more of us do the work, that will allow the insights to appear, then more of us will be able to SEE and to Hear, what Lord Rogers left for all to inherit.  Thank you Brother E.  Because you are doing the work it shows that it can be done and that is what makes it worth holding on.

I refuse to let this work go to waste so I will be using this post in class as an example for evidence regarding what CAN BE done by those who want to DO.