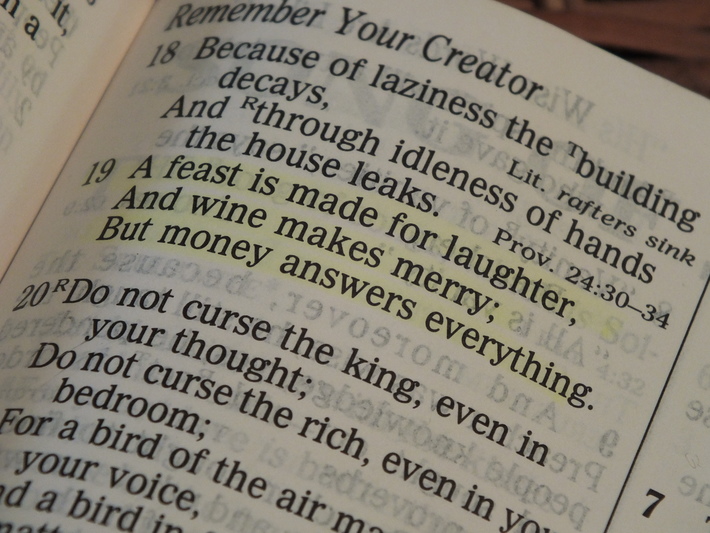 In todays society Money is the current that drives the machinery of consumerism. Money is our medium of exchange and therefore our measurement of value. Money is a symbol that represents value in goods, land or service. Therefore having or not having money is our measurement of personal value and success. Even though I disagree, this belief directs our thoughts toward a never ending quest for more, and more Money,

Thoughts, Beliefs, and Religion
In my quest for more money and a better life I have come to understand that thinking controls and directs our circumstances and environments. “As A Man Thinketh, So Is He”, our thoughts create our reality.

This discovery caused me to ask myself; what guides our thoughts? Consequently, in the contemplation of this question I was led to Beliefs. Our thoughts are conceived, and created by what we believe. “…go thy way; and as thou hast believed, so be it done unto you” Matthew 8:13. Another version says “…what you believe will be done for you”

Where then do our beliefs come from? It seems to me that our beliefs come about as a result of mental conditioning, acquired in our life process. Our beliefs are grounded in the influences of family, friends, environment, education, religion, and overall interaction within the whole of society.

Looking at this list of influences, what stands out in my mind is religion. I think religion is uppermost in the creation of Beliefs, both empowering and disempowering. I have come to this understanding based on the definitions of the word “Religion”.

So, for this discussion about money I wish to probe the dictionary, as well as the sacred text of Christianity, the “Holy Bible”. My investigation reveals the interdependence, and co-dependence of the two terms; belief and religion.

What Are Beliefs ?
According to Mr Webster anddictionary.coma belief is:
* an acceptance that a statement is true or that something exists something one accepts as true or real;
* a firmly held opinion or conviction a RELIGIOUS conviction

The “Metaphysical Bible Dictionary”, has this to say: An inner acceptance of an idea as true. Belief is closely related to faith. Belief functions both consciously and subconsciously.

What is Religion?
Webster anddictionairy.comdefine religion as:
* The BELIEF in a god or group of gods
* An organized system of BELIEFS Ceremonies and RULES used to worship a god or group of gods
* (Internal) An interest, a BELIEF, or an activity that is VERY IMPORTANT to a person or group
* A set of BELIEFS concerning the CAUSE, nature, and purpose of the UNIVERSE, especially when considered as the creation of a “Superhuman” agency or agencies, usually involving devotional and ritual observances, and often * containing a MORAL CODE, GOVERNING the CONDUCT of Human affairs.
* A specific fundamental set of BELIEFS and practices generally agreed upon by a number of persons
* A body of persons ADHERING to a particular set of BELIEFS, and practices
* Something one BELIEVES in and, FOLLOWS DEVOUTLY.(deep religious feeling of commitment)

The “Metaphysical Bible Dictionary” explains religion as:
A systematic exposition on the awareness of a deity who is the supreme ruler of heaven and earth; that which arouses reverence and love for a supreme being.

If you will notice I have capitalized certain key words:
Belief, Cause, Universe, Moral Code, Very Important, Governing, Conduct, Adhering, Set of beliefs, Believes, and Follows Devoutly.
Now if you string these key words together you may get something like this;

“Very important beliefs,(convictions) or a set of beliefs which cause and govern a moral code (conduct). Or, that are adhered to by Religious groups within the universe that follow these codes devoutly” (deep religious feeling of commitment)

Now, that we have examined how thoughts, beliefs, and religion are related, we can now examine the tenants of Christianity, from within the pages of the “Holy Bible”. My investigation of the “King James Version” reveals the use of the word money in a total of 140 verses within its text. For the purpose of this discussion I will take a look at only a few. However, I urge you to continue to investigate.

From this I get the belief that we are to be content with only having the necessities of life. And, it goes on to say that those who go beyond this belief, fall into lustful temptation, that is considered to be foolish, and hurtful. And, that this lust leads to perdition (a state of eternal punishment and damnation after death).

Continuing, we find that the love of money is the root (cause/source/origin) of evil (profound immorality and wickedness when regarded as a supernatural force) And those who covet money have stepped away from faith (which is, a strong belief in God, or doctrines of a religion, based on spiritual apprehension rather than proof), piercing themselves with sorrows. If you be a man of GOD you should flee from this evil.

Now, let’s continue with another well known verse;
Matthew 19:24
And again I say unto you, It is easier for a camel to go through the eye of a needle, than for a rich man to enter into the kingdom of God

The ultimate goal of the participants who operate within the religion of Christianity is to reach the Heavenly realm or the kingdom of God. Following this verse, I get the understanding that possessing riches is an automatic disqualification.

Please, pause for just a moment and consider the effect on believers that these passages cause. The effect is the creation of this very confused society.

Now, for the surprise, let us now take a look at one small and very often overlooked verse;
Ecclesiastes 10:19
A feast is made for laughter, and wine maketh merry; but money answereth all things.

This verse in conjunction with several others allude to money as being a defense. Now, it seems that the script has been flipped.
​
Now, what do you think? Remember, your thoughts are rooted in your beliefs. Maybe, a better question should be; What do you believe? Do you believe having money is empowering or disempowering?
“Your Beliefs Create Your Reality”
Whatever you believe, it is a profound fact that; within this very real and constructed society, built on consumerism we must have money. Money provides the necessities to sustain life for you and your family. But, are we to stop there? Is there honor in lack?

In a universe of abundance, no one should want to just exist. We were created by God(Universal Sprit/Universal Energy/The ALL) in his /her spiritual likeness to be a creator. You were born to create according to the unique purposes, and gifts given you.

Your creations should and will bring forth the wealth, and abundance necessary for the enjoyment and fulfillment of your life. Look around you, all the material objects that you see were created by some man or woman. All these creations were founded in a belief out of which sprang a thought, which then manifested that particular object.

I challenge you, given the fact that you are a Being within this vast universe, that you now become that which you were born to be; a CREATOR! It is time that you create according to your purpose, gifts, talents, likes, and desires. Bring-forth the value you are intended to share with the universe. Abundance, and Prosperity are your birth right!
MANIFEST YOUR DREAMS, AND DESIRES!
START HERE

On a mission to assist in the spiritual evolution of man..
Web sites:
www.absoluteunderstanding.org
www.digitalageprofessionals.com
​www.perceptiveimagery.picfair.com