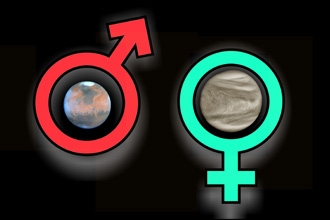 The symbols represent the Greek gods, Thouros and Phosphoros.